Got a negative review? Dealing with a troll in your salon business? How deal with online haters 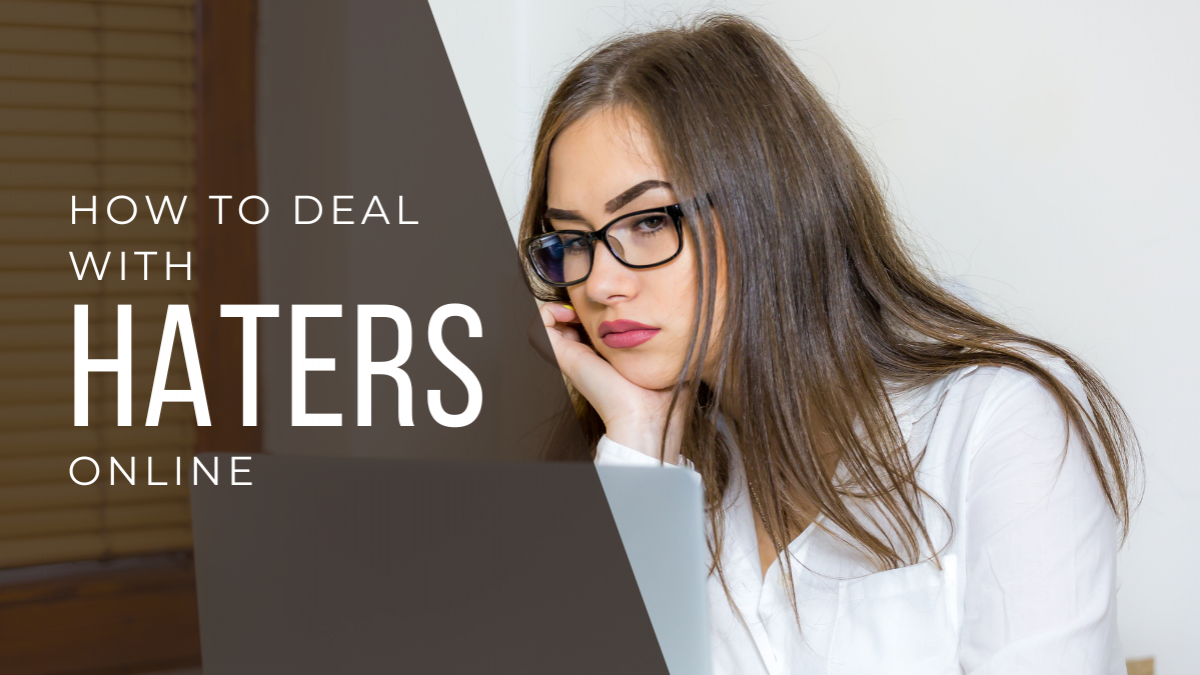 Hurts doesn't it?  When your salon business is your baby and an annoying bumhole thinks it's fun to give us a hard time online.  On our perfectly manicured Facebook pages, in our Twitter feeds, on Instagram and anywhere else that they can vent to their spleen.

I hope this is the blog you never need, but the truth is that when you make yourself visible, it's almost inevitable that you'll have to deal with some online negativity.  Here, I give a bit of perspective and share how I deal with it, because trust me - I know exactly how you feel!

Why do haters have to hate?

So why is it that people have this strong reaction?  Why do people hate online at all?

The shallowest explanation is that they are jealous - that's what your mother would have told you about playground teasing and it's easy to latch on to as a reason now. The theory is that they see us as entrepreneurs having lots of control and freedom over the way that we run our lives. Or they’re jealous of the material stuff – the nice car, the fancy dinners, the luxury holidays that you get to have with your family.

The problem, of course, it that for many of us (at least some of the time) that isn't our reality.  I've attracted negative comments when times are good - but there are times when my reality has been queueing at food banks or rummaging for "Reduced" stickers in my local supermarket.  Not much to be jealous of, yet the hate still comes.

That said, I think we can all be guilty of inauthenticity.  Though I might have been close to bankruptcy that certainly wasn't the image I was presenting online.  I didn't go as far as to present my life dishonestly, but I certainly left out some of the more depressing facts for a time.  So, I guess an outsider might well think we're doing better than we are, making more money than we are, and feel the sting of jealousy.

What you’re doing is freakish.

What we doing as entrepreneurs is not 'normal'.  Normal, for most people, is to get the qualifications that they need to work for someone else, and stay on their payroll until you either retire or die.

We are, as human beings, herd animals. We had to be - it was a matter of survival. It simply wasn't safe to be wandering around the landscape in pre-historic times. You were safer in your tribe, behind your shared walls. That's why human beings have developed feelings of shame and there is a very strong motivator for the rest of the tribe to bring outliers back into the fold.  Don't stand out.  Don't be the tallest poppy.

What you’re doing with your hair salon or beauty salon business is putting your head above the parapet and saying "I don’t want that for myself. I want more control.  I want to steer my own destiny.  I want to excel".

I think a lot of haters would want that too, if truth be told.  And I think there's a very real prospect that you're showing the hater what could be possible for them - if only they weren't afraid.  And that’s uncomfortable if you’re addicted to the stability of being on someone else’s payroll.

So how do we deal with the haters?  As children we were told that when encountering a bully you should just ignore them.

So if someone is leaving a really horrible comment on Facebook, you’re not going to read it?  Rubbish.  I know that many Hollywood actors say they don’t read their reviews - I don’t believe that for a second.

Should you respond at all?

Some people say that you shouldn’t respond and this is a really interesting one.

It's an option.  And there have been times, particularly with some of the homophobic comments I've received, where I haven't needed to respond - either the comment has been reported and removed, or other people have stepped in and responded.

Generally, though, I always respond to negative reviews and comments.  It takes me a while to word but I am so nice in that reply, so saccharine sweet, that it would make you vomit.  That's not easy when they’ve showed me bigoted hatred sometimes, but I'm less concerned with the bully and more concerned with the person reading the conversation.

It’s like TripAdvisor.  If someone complains about a hotel, you don’t think too much about it - especially if the rest of the reviews are fairly positive.  That is, unless their response to a complaint hasn’t been adequate.  If they are defensive, rude or don't respond it stands out as a negative mark on the report.  So my golden rule: I reply.  But just once.

I will not get involved in a bat and ball argument with a hater.  I respond in a way that doesn’t invite further discussion.  If they decide to reply again (which is rare, by the way) I won't be drawn into that conversation.

I personally don’t delete my horrible responses.  When I’ve had comments taken down, I have never been the one to report them.  My audience has rallied round, decided that something is acceptable and reported that post on my behalf.  I think the only exception would be if I felt that my personal safety was compromised.

So how do I deal with it personally?  By finding the one beautiful little nugget of truth or positivity.  It's not always easy, but they are there if you look hard enough.  The goal is to get to a place of gratitude.

Gratitude from hate is a tall order and I haven't always managed it.  But it's a great goal.

I had one guy who put a comment on my YouTube video and he said that he’d watched three of my videos now and he’d come to the conclusion that I was a "ridiculous fat f****t with nothing to say".

It's a sad reflection of the way LGBTQ+ people are treated, but the bigoted aspect actually didn't hurt that much.  I've become hardened to it.  The "fat" shaming hurt - I'd actually recently lost a little weight and was feeling better about my shape.  But hey, at least he didn’t say "old", right?

So where is the treasure?

Well, this guy was actually the first stranger to leave a comment on a video.  I'd had feedback before but only from my business besties, friends and family.  This person was unknown to me - and that meant I was starting to get noticed.

Second, he'd watched three of my videos.  And to be blunt, that was probably two more than almost anyone else.  In fact, it made him my biggest fan!

So yes, the comment had a sting.  But I could get to a place of gratitude as I was starting to have an impact, to get noticed and someone had taken the time to watch three of my videos.

Similarly I’ve had some negative reviews about my book on Amazon.  But they bought the book - at full price as well.  And I can spend the royalties of a hater just as easily as those from a fan.

If you can't find the gold in a comment, can you at least find some truth to work on?  I had a delicious comment on YouTube asking why, if I knew so much about Salons, I didn’t get my f-ing hair cut.

And  maybe there was a little bit of truth in there.  Maybe I could look at how I presented myself online and figure out the kind of brand and image I wanted to project.  And yes, it was an impulse perm!

My final advice is to see the bigger picture of what you do.  One or two haters amongst the hundreds, maybe thousands of happy customers through your career?  You can deal with that.  Think about it in context and if you need a shoulder to cry on, send me an email - phil@buildyoursalon.com